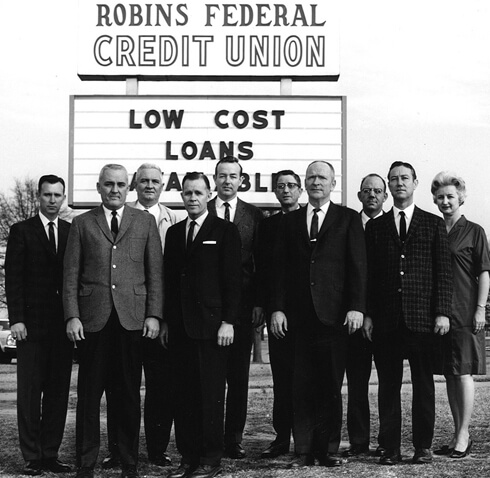 In February 1954, a group of 13 Robins Air Force Base civilian and military personnel signed the application for a charter for Robins Federal Credit Union. The charter read that the field of membership requested was for “civilian employees and commissioned officers of the Department of the Air Force who worked at or had headquarters at Robins Air Force Base, Georgia; employees of this credit union; members of their immediate families; and organizations of such persons.” The charter was approved on March 23, 1954, and on April 1, 1954, Robins Federal Credit Union was officially born.

Interest in the new credit union was widespread and support developed rapidly. By December 31, 1954, some 1,776 people had joined the credit union. Deposits totaled $72,139 and 720 loans totaling $119,189 had been made. This was a modest beginning for a financial institution that currently has 22 branch locations, over 243,000 members and more than $4 billion in assets.

In January of 2016, Robins Federal Credit union became Robins Financial Credit Union when the credit union converted from a Federal charter to a State of Georgia Charter. This allows Robins Financial to offer financial services to family members of current members and those that live or work in the following 45 counties: